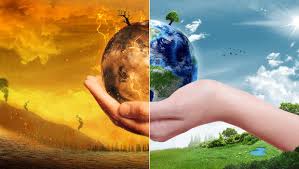 Global warming is a situation where earth temperature increases and exceeds normal levels. The Intergovernmental Panel on Climate Change (IPCC) reports that world temperatures will rise from 1.1 to 6.4 ° C in 2100, while temperatures in Malaysia will rise from 0.6 to 4.5 ° C by 2060. This increase in temperature is due to the greenhouse effect where it involves increasing greenhouse gas concentrations such as carbon dioxide, methane, klorofluorocarbons and various types of pollutants in the atmosphere. Industrial, transportation, agriculture and open burning activities are the major cause of this greenhouse gas increase. The collection and removal of greenhouse gases in the atmosphere will trap the resulting heat from the earth rather than being released into space.

Global warming will cause an increase in sea levels and extreme weather changes. Increasing sea level will cause the decrease of land area and large flood. Global weather changes will cause prolonged drought phenomena and unpredictable rainfall frequencies. Hence, this phenomenon will have a negative impact on plantation crops. Among them are crop damage and crop yield reduction.

Farming crops such as padi, wheat and maize produce the world's leading source of food. High yielding crop production requires optimum weather conditions and water sources. However, the phenomenon of global warming has had a negative impact, where prolonged drought has reduced yields of rice, wheat and maize. This problem will disturb the stability and safety of the food, which will lead to hunger and nutrient deficiency. Hence, various efforts have been developed to produce resistant plants against abiotic pressure such as resistance to drought, flood and high temperature rise.

Plant yields with resilient properties can be produced by conventional breeding methods and genetic engineering. Conventional hybrid breeding requires a breed or a master that has a certain characteristic characteristic, thus the intercourse process between this master can produce progenious value-added properties obtained from both the parent. However, this breeding process takes a long time, 7 years or more to produce a good breed.

Genetic engineering also produces fast-growing elite breeds. This technique involves the transfer of genes that control the specific resistance characteristics of organisms to other organisms. For example, genes from plants to other plants or genes from other organisms to plants. In addition, genome editing methods have also been used. This method is the latest in which it can insert, remove and replace the DNA that controls the resistance properties.

However, in addition to the above methods, there are various other biotechnology methods that can be used to produce abiotic resistance trees. What is important here is that although science can solve a problem, we as khalifah on this earth should take care of the nature to be given to the next generation.